I was quite excited when I received a request with quite an open brief – our friend was going to be travelling abroad to work for a few years, and I was asked to make a chocolate cake to fit the theme of travel, accountancy, and/or Pakistan.  As I later found out, Jamie was travelling to Pakistan in November for a new accountancy post and expected to be there for three years.  They were anticipating quite a few people to be at the leaving party so I thought I could make a two tiered cake, and this allowed me to make a base cake which I was confident in cooking, and then to experiment with making a chocolate cake in my spherical tins, knowing that if it wasn’t a brilliant bake there would be the base cake which could be enjoyed instead!!!  So I decided to make a suitcase for the base, covered and decorated with brown, chocolate flavoured fondant, and then a globe to sit on top of this, covered with regular fondant.

My first step in decorating was to cover the cake board.  I decided this was a nice opportunity to try out a few different things, as the crowd at the party would not mind a few imperfections, and would be honest with their feedback!  So I decided to make a slightly older style of suitcase, with brown ‘leather’ straps and stitch marks..  I thought it would look good on a ‘wooden floor’ and tried out a new technique of marbling fondant to give a wood grain effect. 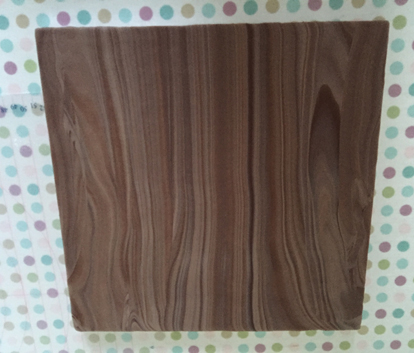 The wood-effect board, made with fondant

I was delighted with the result!  I was in two minds as to whether to mark in the outlines of the floor boards, but decided it would help make it obvious what it was meant to be…. 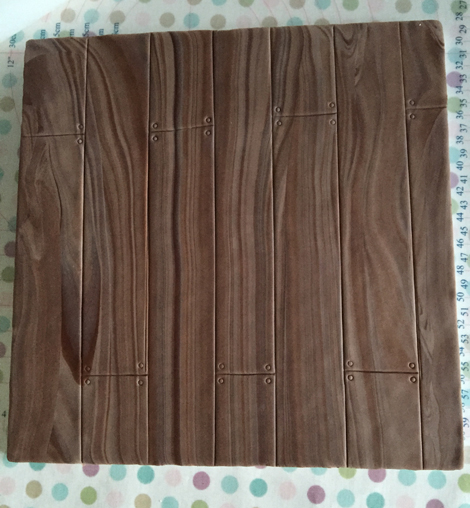 The final wooden floor board effect cake board!

On another board, I covered the rectangular chocolate cake layers with brown chocolate flavoured fondant, carefully moved it into the pre-covered cake board, and before it dried, added the stitch marks and details I wanted it to have to show the two halves of the case.  I added the straps, again with the stitch detail, and placed on yellow fondant for the buckles.  I bought edible gold dust, which once mixed with a clear spirit, could be used like a paint.  So, I carefully used this to paint the yellow buckles, giving them a lovely colour and a good brass effect.  I had a lot of trouble trying to make a handle for the case, but after several attempts, I made something suitable, and after adding more stitching detail and more gold fittings, I was very happy with it.

The finished details on the suitcase

I was really chuffed with how the suitcase looked, and was worried I might ruin it with the globe if I didn’t do a good job!  I didn’t do too badly covering the globe, although I could see it was still not a perfect sphere, which still seems impossible to achieve with cake, I don’t know how people do it!!  I then used green fondant to make the continents and tired to make this somewhat accurate, although I acknowledged I could only manage a certain amount of accuracy!  I then used modelling paste to make a small Pakistan flag, and a plane ticket.  I found out Jamie had not yet booked his flights, but was likely to go with Pakistan Airlines so I just used the airlines logo and wrote Jamie a good luck message on the ticket. 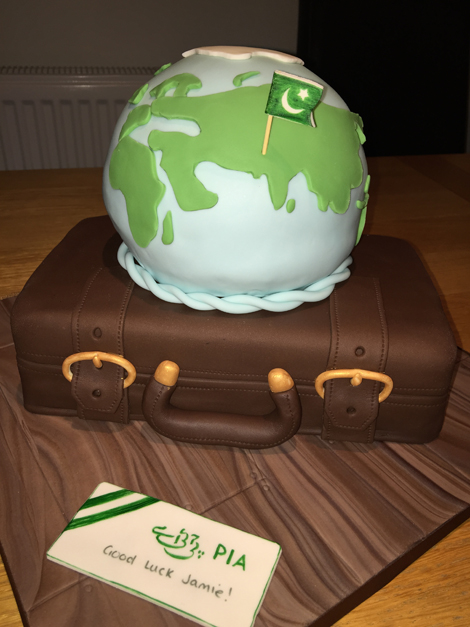 Jamie’s leaving cake, finished just in time for the party!

I was very proud of the cake, and couldn’t wait for Jamie to see it at the party.  The only downside was nobody had told me he was going with his girlfriend Fern, and I felt bad her name wasn’t on there too!  But at least now I can wish them both well on here, as hopefully they will read this before they head off in a couple of weeks time…  GOOD LUCK TO YOU BOTH!