I do like Halloween as another good excuse to get into a fancy dress costume and make a cake 😜  This year I wanted to do something a little gruesome, but was aware that it would be best to keep to something that wasn’t too time consuming, so that I could bake two versions of it for the two house parties I wanted to  go to.  After mulling over a few ideas I decided to make a BRAIN cake!!  I hoped it would require quite a simple technique but would give a very good effect… 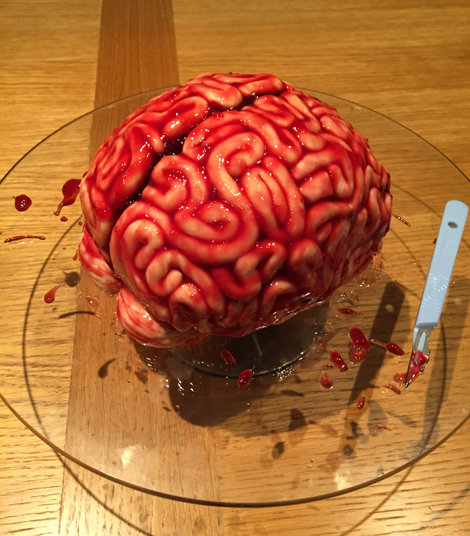 So first up I baked two Red Velvet cakes – a type of sponge cake I hadn’t made before.  I followed a recipe and stuck strictly to it hoping we would see a lovely deep red colour when the cakes were cut.  Unfortunately the whole bottle of red food colouring I added wan’t enough to give this colour, but I was at least pleased with the flavour of the sponge.  I wasn’t too disappointed by the lack of colour, as my main focus for this cake was the decoration…   I began by carving my hemisphere cakes into a less regular, more brain-like shape, and covered them with chocolate buttercream.  Next I rolled ‘sausages’ of flesh coloured fondant, and one by one added them on to the cake in an irregular pattern, trying to replicate the ‘wrinkly’ bits seen on the brain.  I kept a defined line between the two hemispheres, and sat the brain on more fondant shaped to represent the cerebellum.  Once this was complete, I brushed the whole thing with seedless raspberry jam, making sure it filled all the gaps.  The cakes went down well at both parties, and here you can see Zombie Sue posing for me – thank you to Graham for taking such atmospheric pictures! 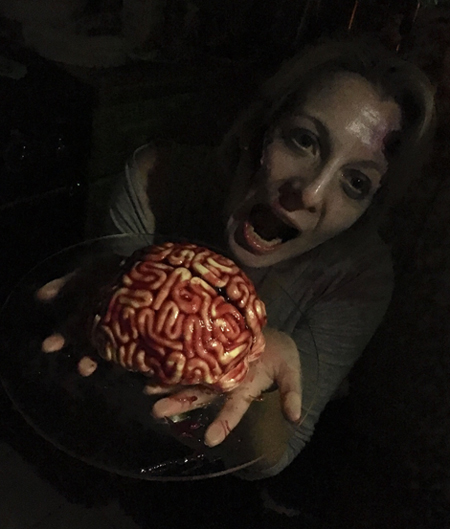 The Zombie about to feed for the night!

One thought on “Halloween cake”