I know I’m a little late with the Christmas wishes, but I didn’t get time to get this post done any sooner, and as it contains some Christmas cake pops it didn’t seem right not to include a Christmas greeting!! So I hope everyone had a great Christmas & is having a brilliant start to 2015

As mentioned, I have a few Christmas cake pops to show you which I made using a different method to normal, and a few other recent makes to show why I haven’t had much free time before now to post!

For this round of cake pops, I decided to use the method I had read about in books and seen on YouTube – whenever I have researched cake pops I haven’t found any instructions referring to using a cake pop machine. Rather than making little balls of sponge cake in my cake pop maker as I have done in the past, I used the method of crumbling the cake and mixing it with frosting, and hand rolling it into the desired shapes.  With little idea about quantities, I decided to just make a standard 8″ Victoria sponge, and then blitzed it all up in my food processor to make fine crumbs.  I weighed out portions of the sponge, and calculated how much frosting to add based on quantities from a book.  I normally make as much as possible of my fillings and frostings, and have never bought ready-made frosting.  However, my mum had got me tub of some chocolate fudge frosting she saw reduced in the supermarket a while ago, and I needed to use it up before it expired as I hadn’t wanted to use it before now!  So I decided now was the ideal time to use it and I added the quantity stated in my book, and mixed it into my crumbled sponge until I had a nice smooth mix.  However, it was also a very sticky mix!  So, I added more crumbs until it seemed a nice enough mix to roll into the shapes I needed – some cones for Christmas trees and hats, and spheres for reindeer heads and Christmas puddings!  Something else I did differently this time was to add my cake pops sticks (dipped in Candy Melts) in to the cake, and to set them in the fridge for 15 minutes.  This really helped and none of them fell off their sticks when I was coating them!  I also melted Trex in a Bain Marie before adding my Candy Melts, and this seemed to help me get a better consistency for coating.  I don’t know how this made a difference to adding the Trex during melting, but I did manage to do a better job coating them this time!  I added extra decoration as needed before the coating dried (I had made all these in advance so they were ready), and once they were dry they were ready for the taste test!!  They were very sweet due to the frosting I had used, but James and I decided that as they were small it was acceptable – so long as no one ate more then about 5 or they might become a bit sickly!  I was pleased with their appearance, but as always, could see there’s still room for improvement!

Although the cake pop stand I have looks good, it doesn’t hold the sticks securely enough for them to stay still during transit, so here you can see the cake pops in a box that James prepared for me to transport and display them in! 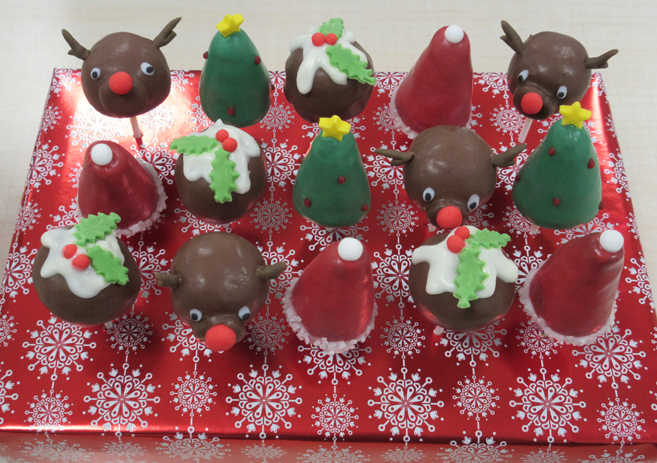 Also over the Christmas period, I had some exciting cake orders!  Firstly, a friend of mine I used to work with called Mandeep text me asking if her friend Tracy could have my details to make enquiries about Frozen themed cupcakes for her daughters birthday.  I thought this sounded exciting as I found Olaf SO adorable that I loved the film just because of him!!  I was then even more excited once Tracy emailed me details of what her daughter Eden had seen and would like….as it included one special Olaf cupcake!  I spent a few days preparing different parts of Olaf so they had time to dry, and assembled him the day before Tracy was coming to collect her order.  I also prepared 30 cupcakes with my favourite frosting coloured blue, and topped them with white fondant snowflakes and small silver sugar balls.  I bought a set of snowflake cutters from Lakeland and was really pleased with them – they were easier to use than I expected and I thought the embossed parts really made them look professional. 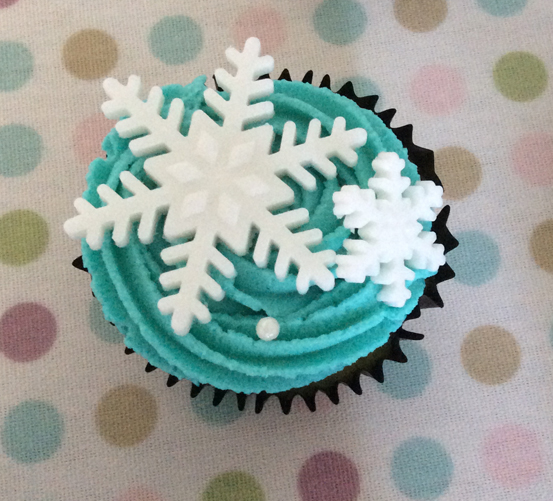 I was really pleased with how they all looked, and Tracy and Eden were delighted too, and having happy customers really adds to my enjoyment of my cake making!! 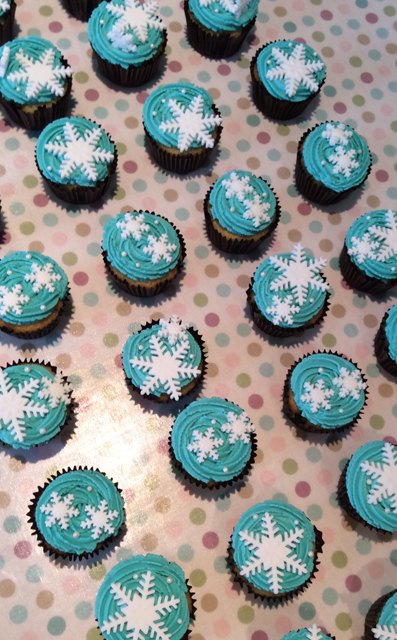 Although I was pretty sad to let Olaf go, I quite wanted to keep him for myself ; ) 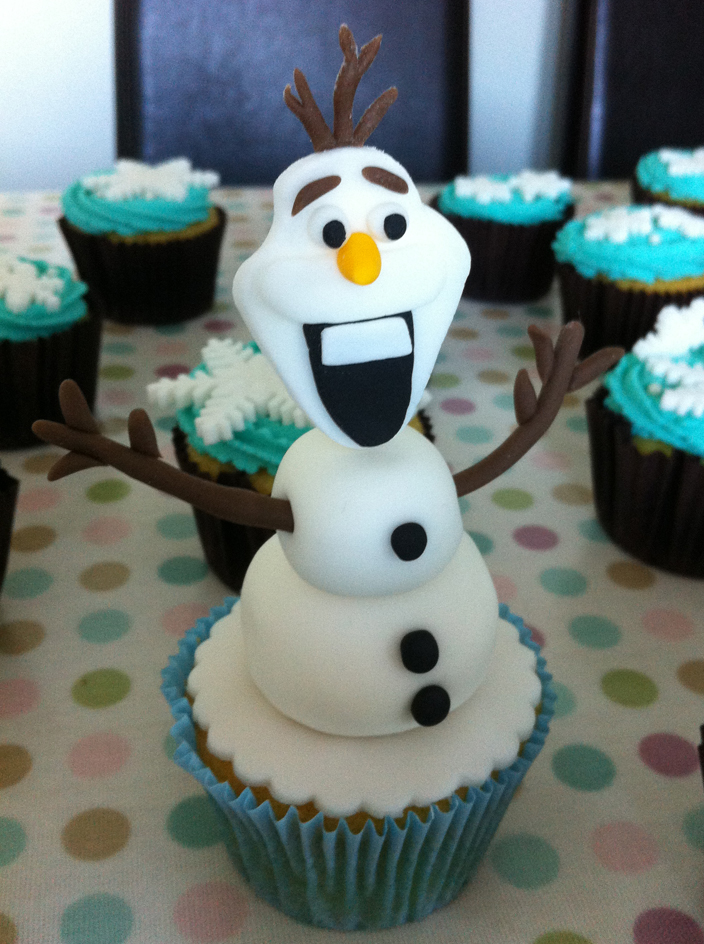 I also spent Christmas Eve and Boxing Day baking and working on cakes, but it didn’t mind as it was for two very special little girls – my god daughters Grace & Freya.  They are twins, but with very different tastes, so they had very different requests for cakes!  Grace loves superheroes and asked for a Spider-Man cake, and Freya asked for a Princess cake with her favourite colour, purple.

As Freya requested chocolate cake, I knew I could bake this on Christmas Eve as it’s flavour would develop over the extra few days and it would still be fresh for their party on Saturday.  I also hired a tin, and thought I’d be best to leave myself enough time in case my first cake didn’t bake well as the tin held such a large amount of cake mix, and I still find getting a good bake on a large sponge tricky.  The tin I hired was a Wilton Wondermold, and it is designed to be used with the top half of a barbie doll stuck into it, so the cake forms the skirt of her dress!  I had seen these cakes when Freya mentioned it to me, so was quite excited to try it out, and bought a blonde doll to use to match Freya’s hair colour.  My first try with the tin baked reasonably well, but I didn’t cover the top and the outside edge at the top turned a bit crispy as it took about an hour to bake!  However, my main issue was that I didn’t use enough cake mix, and the dress looked too short and out of proportion!  So, I doubled the amount of mix and baked again later Christmas Eve, covering the top of the cake with foil towards the end of the baking time to stop it drying out.  Luckily I was happy with this second attempt, and could see as I cut it into three layers, that it had cooked well and evenly throughout.  On Boxing Day I filled the layers with chocolate buttercream, and covered the whole of the dress with more buttercream for the fondant icing to stick too.  I made a white underskirt, embossed with a small flower pattern, with silver sugar balls in the centre of each flower.  I sprayed this white part with a shimmer spray to add some subtle sparkle.  I then covered the rest of the skirt with purple fondant, which took me two attempts as my first piece of rolled fondant ripped as I moved it as it was so big and difficult to move.  I added some frills around the underskirt, and dressed the doll with white fondant, adding two purple flowers and a purple flower necklace. 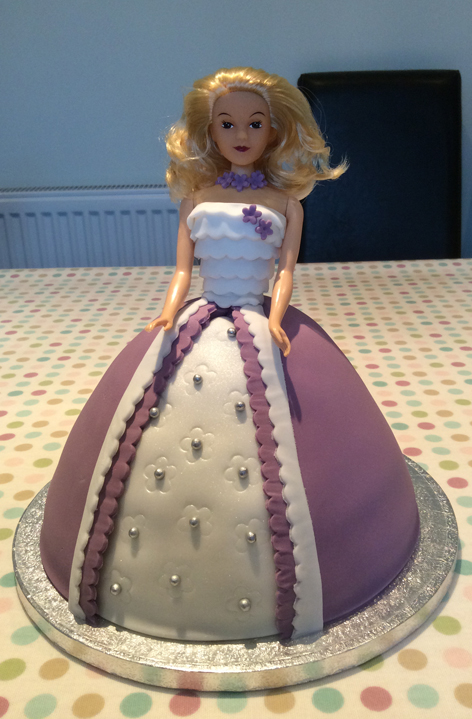 Grace asked for a vanilla victoria sponge, so I baked this Boxing Day morning, and once it had cooled I levelled it and filled it with raspberry jam and vanilla buttercream.  I covered it with a bold blue fondant, and spent ages rolling pieces of black fondant to make a spiderweb pattern.  As this had taken so long, I decided to make some black royal icing and to pipe the pattern on Spider-Man’s face to make it quicker, although I thought this was a bit of a gamble as I don’t do much piping and still need to work on this skill!  I had already cut out some red shapes and left them to dry for a few days, so I took one of these and piped the same pattern, and before it dried I added his eyes from rolled black and white fondant.  I stuck this onto the cake with more royal icing, and with the contrast of the colours and a bright red board, I thought the cake looked quite impressive! 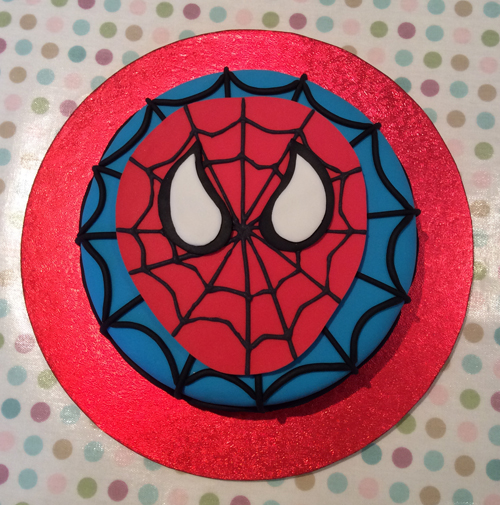 Grace and Freya were really pleased with their cakes, and I’m already looking forward to what they might ask me for next year, if I’m lucky enough to be asked again! 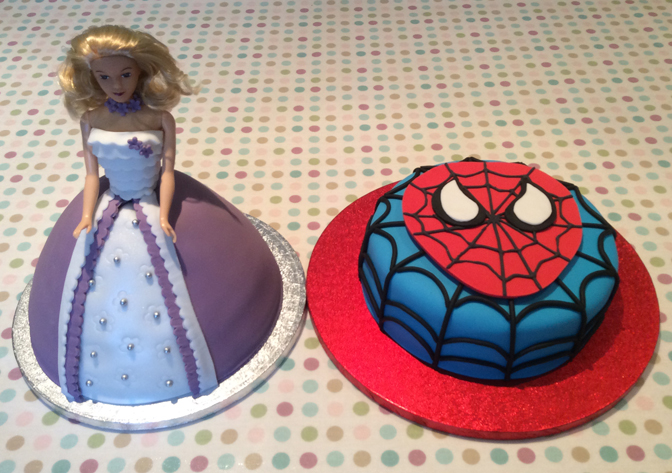 Grace and Freya’s cakes ready for their 6th Birthday party

Finally, I just have a quick paragraph about my last Boxing Day bake…  My brother Craig had requested some White Russian cupcakes as part of his Christmas present, and I wanted to bake them as late as possible so he could take them back to Bristol with him to share with his girlfriend Natalie.  I had made these for the first time a few months back and had text Craig to tell him now much I liked them, as he was the one who got me into drinking White Russians!  This cupcakes had Vodka and Kahlua in the mix, and I also brushed extra Kahlua over them when they were still warm from baking.  I topped them with a Kahlua buttercream, and dusted some of them with cocoa powder to make them look more appetising.  I loved the taste of these, and certainly want to try more alcoholic cupcakes now! 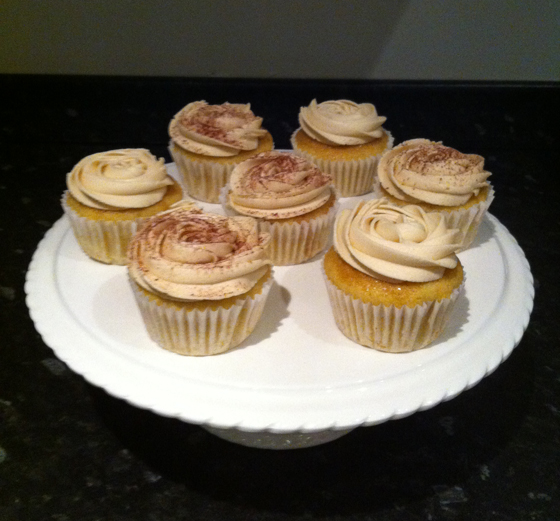